China’s official newspaper of the ruling Communist Party (CCP) has taken serious umbrage with recent comments by Steve Bannon, after the former Trump chief strategist penned an Op-Ed in the Washington Post declaring that China is run by a “radical cadre” whose goal is to threaten the global hegemonic power. 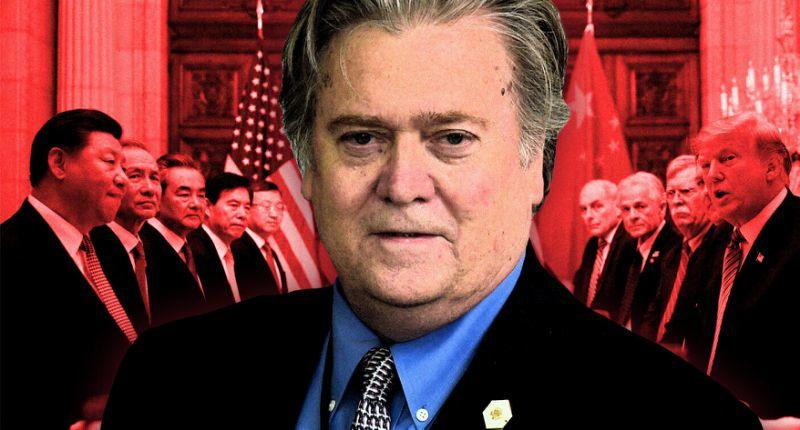 On Wednesday, the Times wrote:

US far-right nationalist Steve Bannon published an article  in The Washington Post on May 6, vehemently vilifying China and inciting his country to confront China. The goal of the Communist Party of China (CPC), he claimed, is “to be the global hegemonic power.” To prove his point that it was “futile” for the US to compromise, he asserted China “has been waging economic war against industrial democracies,” and the China-US trade dispute is “a fundamental clash.” Bannon maliciously smeared China by saying that China is a “rapidly militarizing totalitarian state imprisoning millions in work camps,” and “the world is a house divided half slave, half free.” Washington and Beijing are “facing off to tip the scales in one direction or the other,” he wrote. –Global Times

Most dramatically, the Times adds: “To rational analysts, Bannon is not just radical, but a bit insane. He is obsessed with certain resentful suspicions that the US is on a razor’s edge.”

The article continues, saying that Bannon’s ideas – which have a “deep racist imprint” – are roughly equal to those of European extreme-rightists, “even neo-Nazists” [sic], and that such line of thinking used to be outside of the mainstream US discourse.

Bannon’s “extreme personality” also “kept his peers away and had him expelled from the White House,” according to the Times, which adds that the former Trump adviser has “no idea about the globalized world and the complexity of major power relations.”

Of note, Bannon is a former Goldman Sachs employee with a master’s degree from Georgetown University School of Foreign Service in national security studies, who served as a special assistant to the Chief of Naval Operations at the Pentagon – while attending Georgetown.

Bannon and far-right wingers do not care at all how much pain the China-US conflicts bring to the people. The only thing they concerned about is defeating China. However, not only will a powerful China break their dreams, but a loose-minded and swaying US will also disappoint them. Although the wills that tend to prioritize American interests exist in US society, they cannot be incited by Bannon and his followers and turn into a real determination to be antagonistic toward China. American people want high-quality goods at reasonable prices and they want peace and predictability. They don’t want to see a strategic clash between the world’s superpower and the second biggest power in the world. They don’t want to sacrifice their life for the sake of the so-called ideals of a few zealots. The US government hit China with high tariffs. But when Washington politicians saw the plunging stock market, they rushed to release signs to ease tension. Adopting a tough approach toward China doesn’t work in the US as it does not fit the theme of peace and development in the 21st century. –Global Times

The article goes on to knock Bannon’s appearances on ‘Fox TV’ – where he acted as an “opportunist who exploits the trade war to play up to US policies and public opinion.”

Bannon appeared on CNBC Wednesday morning, where he predicted that there was “no chance” that President Trump will back down over the trade war.

“China has been running an economic war against the industrial democracies for 20 years,” Bannon said, noting that previous presidents – Clinton, Bush and Obama – all ‘blinked’ when it came to trade with China, adding “Trump didn’t blink.”

“Every president beforehand, Clinton, Bush and Obama, have all blinked. Trump didn’t blink.” Steve Bannon on the current state of trade negotiations with China. pic.twitter.com/tQv9dz5dE9