It is possible to think two things at once: that U.S. President Donald Trump’s foreign policy has been “bad,” which many think it has been, and that it has offered a somewhat coherent alternative for how the United States should conduct itself beyond its borders. This suggests that the casual and smug dismissals of Trump, on domestic and foreign policy alike, are missing something important.

As someone who believes that American ideals matter abroad—particularly that support for human rights and democracy abroad is the only way to advance our interests in the long run—I would not be able, under almost any conceivable scenario, to support Trump’s foreign policy. I have a different worldview with different starting assumptions. From a nationalist perspective, however, the Trump doctrine offers considerable appeal. It emphasizes, even idealizes, American “sovereignty,” based around a narrow conception of U.S. economic and security interests. This results in a more obviously transactional foreign policy, with the president pursuing those interests with little regard for international norms or institutions. Non-citizens are given little consideration, and values and ideals are perceived as luxuries at best and obstacles to the pursuit of the national interest at worst. Stylistically, the Trump doctrine is spare, unsentimental, and confrontational—almost ostentatiously so.

As with most doctrines, the policy doesn’t quite match the rhetoric. But Trump’s stamp on American foreign policy will continue to matter in its clear and ambitious attempt to put forward a set of guidelines for those who wish to carry the “America First” mantle into the future. In other words, Trump has managed to introduce a set of ideas that have their own inherent power, even if his administration does not always reflect these ideas in day-to-day foreign policy. This, along with profound shifts in domestic politics, could ensure that Trump is remembered as one of the more consequential presidents of the modern era.

For example, Trump’s Sept. 25 address to the U.N. General Assembly was aggressively outside Washington’s bipartisan consensus emphasizing the importance of U.S. leadership in preserving the “liberal international order” and, at the very least, paying lip service to the promotion of democracy abroad. Except where Washington can use human rights as a cudgel against its enemies, Trump has displayed practically no interest in other countries’ internal conduct. This is in keeping with what I call “cultural sovereignty,” which the president expounded on in his address:

“Each of us here today is the emissary of a distinct culture, a rich history, and a people bound together by ties of memory, tradition, and the values that make our homelands like nowhere else on Earth … I honor the right of every nation in this room to pursue its own customs, beliefs, and traditions. The United States will not tell you how to live or work or worship.”

The rest of the speech tended toward the dark and confrontational, avoiding even the pretense of foreign policy idealism. It was chilling in its straightforward aversion to the spirit of compromise and cooperation. Of course, some of this is posturing, but some of it is quite real. In the Middle East, Trump’s predecessor Barack Obama hoped for less conflict but showed little interest in investing the resources needed to achieve that outcome. (The one initiative it did expend notable energy on, the Iran deal, was founded on misplaced premises, as I’ve argued elsewhere). Trump couldn’t be more different from Obama in both instincts and intentions. Yet he has taken Obama’s studied disengagement to a different—perhaps logical —level: unapologetic indifference.

A telling encapsulation of this is Trump’s early remarks on the repercussions Saudi Arabia could face for the assassination of journalist Jamal Khashoggi. He first thought about the transactional nature of Washington’s relationship with Riyadh:  “I don’t like stopping massive amounts of money that are being poured into our country on—I know they’re talking about different kinds of sanctions, but they’re spending $110 billion on military equipment and on things that create jobs, like jobs and others, for this country.” Trump also pointed out that Khashoggi wasn’t a U.S. citizen (he was a resident of Virginia), implying a sharp distinction between citizens and non-citizens that anchors Trump’s stark and hyper-realist worldview. In this reading, if Khashoggi were an American citizen, then it would fall under American sovereignty; that he isn’t a citizen places it outside the domain of “America First.” Trump has since threatened “severe punishment” but has resisted taking any action that might affect arms sales.

The perception, whether fair or unfair, that Trump will generally have very little response to human rights abuses determines the risks allies are willing to take. Emboldened autocrats acting with more impunity than before are a logical and tragic result of “America First.” By any reasonable standard—and in actual measurable outcomes—betting big on Saudi Arabia’s young crown prince, Mohammed bin Salman, has been a terrible misstep, but it does not undermine the coherence of a worldview that sees little room for moral outrage directed toward friends as long those friends serve a narrowly defined understanding of U.S. national interests. (I purposely use “friends” rather than “allies,” since Canada, in the Trump worldview, is more ally than a friend).

There is, then, a method to what appears to so many as either madness or stupidity, or both. But to have a method and to display more, rather than less, coherence is not necessarily a good thing. 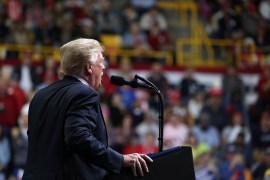