Today Michael Cohen, the former personal lawyer to President Donald Trump, testified before the House Oversight Committee. His testimony offered explosive allegations and included documentation that Cohen argues corroborates his claims. However, there is one big political question coming out of today’s testimony: did it change Republican minds about the president?

Start with the fact that Michael Cohen’s veracity is in the eye of the beholder. Democrats desperately want to believe his claims and will argue that his corroborating, documentary evidence helps him overcome his perjury convictions. There is merit to that argument. Prosecutors rely on unsavory characters all the time, but require corroborating evidence to help confirm the merit of testimony and simultaneously improve the character of the witness for the trier of fact.

For Republicans, they have tethered themselves to the president (as most co-partisans do in recent decades) and thus desperately want to denigrate Mr. Cohen’s character and paint him as a professional liar who will continue to lie. There is merit to this argument, too. Although Mr. Cohen is claiming he is on the road to redemption, he has shown disregard for an oath before Congress—even he acknowledged skepticism of his claims are understandable.

Democrats want to paint Mr. Cohen as Ebenezer Scrooge in A Christmas Carol, who sees the error of his ways and redeems himself (finally) by leaving his old life behind. Republicans and President Trump want to paint Mr. Cohen as Nicely-Nicely Johnson, a gambler from Guys and Dolls, who stands before a prayer group with a gang of his seedy compatriots and invents a dream about his newfound salvation.

Thus Mr. Cohen’s testimony today reinforced existing partisan views and did nothing to change the minds of anyone on the committee, even though he offered testimony claiming the president suborned perjury, obstructed justice, and committed campaign finance violations. If those claims are ultimately true, they would fall neatly into the constitutional standard for impeachment and removal.

Republican members of Congress were clearly unmoved by Cohen’s claims and his corroborating documentation, and Republican voters are likely to feel the same way. According to a POLITICO/Morning Consult poll released on the morning of the Cohen testimony, 81 percent of Republicans view President Trump favorably (while only 37 percent of independents and 10 percent of Democrats did). Moreover, Republicans do not believe the president’s campaign worked with Russia to influence the outcome of the election. Only 11 percent of self-identified Republicans believe in campaign collusion with 73 percent denying it.

Mr. Cohen’s testimony suggested he did not know if the president colluded directly with Russia, but that he would not be surprised if he did. The most damning part of the Cohen testimony involved non-Russia-related crimes. However, the Special Counsel’s office is investigating much more than collusion with Russia (as is evident from the many indictments and convictions thus far, including Cohen’s). Once again, only 27 percent of Republicans believe the Russia investigation by the Department of Justice has been fair, while 52 percent of Republican voters believe it has been unfair.

Michael Cohen’s testimony is unlikely to change the minds of Republican voters regarding the president’s behavior, and members of Congress seem committed to the president and his innocence. And frankly, that’s understandable. Among voters who voted for Republicans in the 2018 midterms, 83 percent support President Trump, 58 percent believe the Mueller investigation has been handled unfairly, and 77 percent believe Mr. Trump did not collude with Russia. A Republican who turns on the president would be turning on his or her voters—and to do that because of the Congressional testimony of a man going to prison for lying to Congress would be politically devastating.

If Republican voters do not turn on the president, Republican House and Senate members will not either. We have precedent for this. When President Clinton was impeached by the House in 1998, his job approval rating generally was quite high (between 63-73 percent), and his approval among Democrats was sky high (around 90 percent). Democrats did not turn on him. But in 1974, when Richard Nixon faced certain impeachment and removal, the tipping point was Republican senators recognizing that public opinion had turned against the president (24 percent approval) and support among Republicans had dropped from 91 percent to 50 percent in the 18 months leading up to his resignation.

Michael Cohen’s testimony won’t change Republican minds about the president, and unless the Mueller Report moves Republican voters’ opinion, the president can rest assured the defense team he had on the Republican side of the House Oversight Committee provided a preview of how Republican senators would handle an impeachment trial.

Note: The author thanks Jason Taper for contributing to this post. 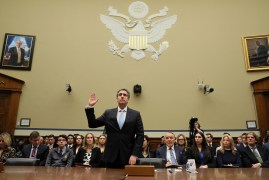