As it turns 70 this week, the Atlantic alliance has no shortage of champions in Washington, even if it lacks one in the Oval Office. Yet, the focus on NATO—the North Atlantic Treaty Organization—alone can be misleading by magnifying the importance of the defense alliance in the European project. In reality, the trans-Atlantic community has relied on two pillars: a successful defensive alliance and an even more successful project of European integration.

Americans who are truly committed to the idea of a Europe “whole and free” should realize that NATO is no longer the main spinal cord of the European project; the European Union is. When George H. W. Bush coined the phrase in 1989, the level of intra-European integration was arguably on par with the defense alliance as providing stability and prosperity to the continent, and Americans were still heavily involved in both. Remember, this was pre-Maastricht Treaty, before the EU itself. Three decades of political, economic, and monetary integration later—and 16 new members later—the European Union is deeply entrenched in the lives of Europeans.

Today, 28 European democracies, which used to compete among themselves and sometimes fight to their ultimate demise, now choose to pool sovereignty and have their interests communally discussed and collectively defended. The EU is a power multiplier: Every one of the 28 has a stronger individual voice because they stand together in the European Union. Small European countries, whose geography and demography would force them to cave to stronger neighbors, can now count on the solidarity of the group—as illustrated by the unwavering support for Ireland by the other 26 member states and the Brussels institutions in the Brexit negotiations.

The neighbors of the European Union are no fools. Those who seek prosperity and stability hope to join the EU club. Those who reject the model set by the West and liberal democracies feel threatened by the European Union—it is the prospect of Ukraine moving into the EU’s orbit through an Association Agreement that triggered Russia’s hostility and ultimate aggression, not NATO. The power of attraction of the European Union, at least as much as the security guarantees of NATO, has helped stabilize Eastern Europe.

Despite these realities, Americans often indulge in a scornful disregard for the EU. Recently, benign contempt has taken an ugly turn. Since taking office, President Trump and his administration have attacked the European Union and individual member states repeatedly, with near impunity.

At first sight, American complaints appear to be centered on the issue of Europe’s trading power, which rivals that of the United States. For Donald Trump, the EU was created to “take advantage of” the United States and it is “worse than China.” Early in his mandate, the American president pushed for tariffs on steel and aluminum and threatened to go after automobiles, until a meeting with EU Commission President Juncker put a brake on the downward spiral.

However, a deeper look reveals a fundamental ideological contention: The brand of nationalism and populism that defines this administration stands in direct contradiction with the very existence of a liberal, supra-national body such as the European Union.

As laid out by the State Department’s Director of Policy Planning Kiron Skinner in December 2018, the administration holds the view that “international institutions have steadily encroached on the rights of sovereign nations” and that “nothing can replace the nation-state as the guarantor of democratic freedoms and national interests”—an indictment of the EU’s very existence. The ideological clash is reminiscent of older times. Addressing a crowd in Warsaw in July 2017, President Trump likened the European Union to the Soviet Union, criticizing a similar “steady creep of government bureaucracy that drains the vitality and wealth of the people,” an equivalency popular in conservative circles. Similarly, Secretary of State Mike Pompeo suggested in a December 2018 speech in Brussels that EU bureaucrats were not really working for the interests of European citizens.

By making no secret of his personal support for euroskeptic forces, Donald Trump has become an active political opponent of the European Union in its existing form. He celebrated the Brexit vote, expressed support for far-right candidate Marine Le Pen ahead of the French presidential elections, disparaged Angela Merkel repeatedly, and appeared to rejoice at the Yellow Vests protest movement. He criticized Theresa May for negotiating a “soft” Brexit, and even recommended to Emmanuel Macron that France leave the EU. The American president has nominated ambassadors famously critical of the EU, and his administration demoted the EU ambassador’s status without notification, before reversing under criticism.

As Donald Trump torments both the Atlantic alliance and the European Union, all rush to NATO’s bedside, and few worry about the EU. Truthfully, Atlanticists love to love NATO. It stands for values, valor, unity, solidarity. NATO won the Cold War. Celebrating NATO is celebrating the military. It is much harder to love the EU, the bureaucracy, the politics, the regulations. The EU lacks democratic appeal, and its slow-moving decisionmaking process create many frustrations. Unlike in NATO, the United States sits on the sidelines, it does not control who enters, or who stays in. The EU is also an economic peer competitor, a tough trading partner, and a sovereign international actor, at times non-compliant with American demands.

Yet, the prospect of an implosion of the European Union should be as unbearable and intolerable to an American audience as the dissolution of NATO—or more so, as no one wants to see the demons of nationalism back on the European continent, along with a global economic catastrophe. Benign neglect is counterproductive; but a policy openly hostile to the European Union is a grave mistake. In a world where the strongmen are striking back, Americans should not forget that the European Union stands with the United States when it matters most. The NATO summit in Washington this week should be the occasion to recall not only the utmost importance of the Atlantic alliance to trans-Atlantic security, but also the crucial contribution of the European Union to peace, unity, and ultimately security for Europe and beyond. 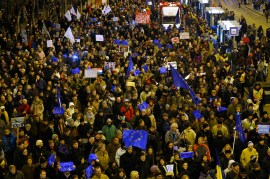