Earlier this week, Qatar’s energy minister Sherida al Kaabi announced that Qatar will leave OPEC, effective January 1, 2019. Qatar was the first nation outside the five founders of the cartel (Iran, Iraq, Kuwait, Saudi Arabia, and Venezuela) to join, in 1961, and will now become the first Middle Eastern country to leave the organization. Al Kaabi stated that the withdrawal decision “reflects Qatar’s desire to focus its efforts on plans to develop and increase its natural gas production from 77 million tonnes per year to 110 million tonnes in the coming years.” Although al Kaabi’s statement reflects Qatar’s long-term energy planning, it avoids a key reason for Qatar’s departure—the continuing crisis in the Gulf Cooperation Council (GCC) and the dispute with OPEC’s de facto leader, Saudi Arabia.

Since its diplomatic rupture with Saudi Arabia, the United Arab Emirates, Bahrain, and Egypt (the Quartet), Qatar has increasingly been sidelined within the OPEC bureaucracy. Qatar only produces about 600,000 barrels of oil per day, so OPEC’s ability to shape the market will not be affected strongly. However, Qatar’s departure sends the signal that Qataris not only want to pursue a more independent foreign policy but an independent energy policy as well. Shiekh Hamad Bin Jassim, the previous Qatari prime minister, tweeted: “Leaving OPEC is a sound decision, as it has become a useless organization that does not add anything to us, and is only used for purposes that harm our national interest.”

Calling OPEC a useless organization is a bit of an exaggeration, but OPEC’s role in a changing oil market is uncertain. After the oil price plunge of 2014, OPEC joined forces with Russia in 2016 to cut production and get the oil price back into an acceptable range for producers. The verdict is still out over whether this development was a sign of OPEC’s weakness or strength. On the one hand, the oversupply and inventory overhang were so great that output cuts from Russia were needed in addition to those in OPEC to balance markets. On the other hand, OPEC had the strength to bring Russia into the fold and achieve its goals. Only time will tell how OPEC’s role will evolve in the changing oil market, as production in the United States and other non-OPEC countries grows.

More certain is that Saudi Arabia and Russia are calling the shots in OPEC today. Officially, OPEC operates as a consensus organization, but Saudi Arabia has always carried the most weight in OPEC decisionmaking. With the addition of Russia, these two oil production behemoths are leaving little room for other input. The meeting between Russian President Vladimir Putin and Saudi Crown Prince Mohammed bin Salman (MBS) at the G-20 meeting this weekend in Buenos Aires is likely to make output reductions at the December 5 to 6 OPEC meeting in Vienna a foregone conclusion.

Does Saudi and Russian hegemony encourage more small producers to leave OPEC? Since the Qatari decision to leave is more about politics than about oil, the incentives for other small producers haven’t really changed. We don’t see Qatar’s departure encouraging other countries to head for the exit, but smaller producers have certainly lost clout in the current OPEC+ (which includes Russia, Kazakhstan, and others) configuration.

GCC Crisis: No End in Sight

Global pressure on Saudi Arabia since the murder of the journalist Jamal Khashoggi has led to speculation that MBS may seek to wind down two of his key foreign policy misadventures, the war in Yemen and the blockade of Qatar. MBS had spoken more positively of Qatar during the recent ill-fated investment conference, saying that despite their differences, Qatar has a “great economy and they will be doing a lot in the next five years.”

Despite this, there is little tangible evidence that the Quartet is backing down from the crisis, and with Qatar leaving OPEC, the Qatari’s are doubling down against the Saudis. As the crisis enters its 18th month with no end in sight, there is little incentive for Qatar to remain part of OPEC, and raises questions on the long-term viability of the GCC itself.

Yesterday, the Emir of Qatar received the formal invitation from King Salman to attend the GCC summit scheduled for December 9 in Riyadh. At last year’s summit in Kuwait, the Kuwaiti Emir was attempting to mediate the crisis and invited all the other heads of state. The Qatari Emir attended, but in a snub to the Qatari delegation Saudi Arabia, the UAE and Bahrain sent ministers or deputy prime ministers, rather than heads of state.

The Qatari’s have not yet announced the level of the delegation that will attend the summit next week in Riyadh. The fact that the Saudi’s are hosting, and the likelihood that King Salman will chair the summit, puts the Qataris in a difficult position. Either the Emir attends which sends a more conciliatory note, or send a lower level delegation which would be perceived as a snub to the Saudi King, MBS, and the other leaders in attendance. The summit next week will show if there is a potential face saving out for all involved, or if the GCC crisis will become the new norm. 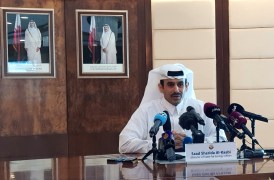