During the 2018 midterm season a disproportionate amount of attention has been paid to U.S. House races, while Senate races have taken a backseat. This is due in large part to the higher likelihood that there will be a change in party control in the House, while the Senate is much more likely to emerge from the November elections still in the hands of a Republican majority. Although it is not impossible for Democrats to carve a path to a very narrow Senate majority, that path would require a massive blue wave, generated from unprecedented turnout (by midterm standards) from women, people of color, and younger Americans.

However, the unequal attention paid to Senate races does not reflect that it is a very competitive set of races, the outcome of which will still have significant impacts on lawmaking in the United States. Starting today, FixGov has launched our series Race for the Senate 2018 Senate to highlight the key Senate races this year. Leading up to Election Day we will run daily posts about the most competitive races across the country, focusing on the specific issues, political dynamics, candidates, and other forces that are influencing those individual races.

At FixGov, we could have offered our own inside-the-beltway view of the races within the states, but they would surely be incomplete analyses. Instead, we wanted to lean on some of the nation’s experts best-suited to weigh in on these races. We asked political scientists from colleges and universities within each state who study Congress, elections, and/or state politics to pen pieces for us. The response has been overwhelming.

These experts will discuss races like Texas where an insurgent Democratic challenger, Beto O’Rourke, is running against incumbent Republican Ted Cruz in a race that few expected to be as competitive as it has become. We will cover North Dakota, perhaps Democrats’ most vulnerable Senate seat, in which incumbent Heidi Heitkamp is trailing North Dakota House member Kevin Cramer as he looks for a promotion to the upper chamber. We will also cover open seat races, like the campaign in Arizona between two House members, Republican Martha McSally and Democrat Kristen Sinema, who are battling down to the wire to replace retiring Republican Senator Jeff Flake.

While much of the 2018 midterm has focused on the role of President Trump, the debate over health care, the popularity of the recent tax reform law, and the booming economy, many of these races also engage local-level issues that are important to the constituents in their respective states. The importance of those issues and the promises that candidates make with regard to those issues can help us understand how they may vote on critical legislation in the next Congress. 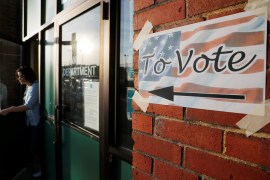