The 2018 Florida Senate race pits Democratic incumbent Bill Nelson against two-term Republican governor Rick Scott. This race is surprisingly close: Nelson’s status as an incumbent in the out-party during a midterm election in a presidential swing state would normally add up to a relatively secure reelection. Instead, most recent polls show Nelson clinging to a narrow lead and FiveThirtyEight gives Nelson just a 63 percent chance of victory. To explain why, I will first discuss Florida’s Senate election in terms of the national political environment, then highlight factors that are unique to the state and these two candidates.

Florida, of course, is a swing state in presidential elections and was critical to Donald Trump’s Electoral College victory in 2016. Trump won Florida 49.0 percent to 47.8 percent and, as of September 2018, his job approval rating in the state is nearly identical at 49 percent approve, 47 percent disapprove. President Trump has visited Florida 11 times in 2018, although several of these visits were to Mar-A-Lago and other Trump-affiliated properties in the Palm Beach area. Trump publicly endorsed Scott before the state primary election, but Scott clearly views Trump as a liability in a general election as discussed in a series of articles on how Scott seeks to maintain public distance from Trump. In particular, Trump’s statements downplaying the death toll and devastation in Puerto Rico due to Hurricane Maria in 2017 led to greater distancing from Republican candidates like Rick Scott trying to woo displaced Puerto Ricans (see below).

According to a recent NBC/Marist poll, the top public policy issues[i] are health care, immigration, and guns.

Of these, health care and guns are the most important issues to Democratic voters while Republicans are most intense about immigration, then health care, then foreign policy. Florida, of course, has been the site of two horrendous mass casualty shootings at the Orlando nightclub Pulse in 2016 and Marjory Stoneman Douglas High School earlier in 2018. Florida is thus ground zero for a possible #Marchforourlives youthquake—but only if young voters turn out.

Some politics Is local & personal

In addition to these familiar national issues, there are a few issues that are more specific to Florida. First, it is unclear what effect Hurricane Michael will have on the election. This devastating storm gives Governor Scott, President Trump, and Democratic gubernatorial candidate Andrew Gillum an opportunity to actively support hurricane victims. At the same time, early voting begins as early as October 22 and the general election is four weeks after the storm made landfall. Since the Panhandle tends to be a reliably Republican region and is still in chaos, any decrease in voter turnout in the affected area may decrease support for Governor Scott.

Hurricane Michael highlights environmental issues that are especially salient in Florida. First, it highlights the fact that climate change is not an abstract future threat for Florida. Floridians are already suffering its consequences in more intense storms, higher insurance rates, and the slow creep of ocean water out of the drain and into the streets. Second, this summer there has been a stark increase in “red tide” and algae blooms off the Florida coast. While both of these phenomena can occur naturally, Scott’s critics contend that poor management of agriculture has led to an overabundance of fertilizer in the water, resulting in toxic rivers and ocean beaches.

Returning to the question, why is Nelson underperforming, there are two basic answers. First, although he is a senior member of the Senate serving on the Finance Committee, Nelson has cut a fairly low profile in the Senate, and has not made an impression either as a press-chasing “show horse” or a policy-making “work horse.” Consequently, Rick Scott has hit Nelson for being an empty chair.

Second, Florida has a highly variable population. From 2012 (the last time Nelson ran for reelection) to 2016, Florida had the highest population turnover of any state. In 2017, Hurricane Maria hit Puerto Rico, knocking out power across the island and damaging an already-reeling economy. Thousands of Puerto Ricans fled to the mainland, especially Florida, where they were eligible to vote as soon as they registered. Governor Scott reached out to these refugees as they arrived, hoping to ease their transition and perhaps earn their votes. However, the more the election highlights President Trump and his administration’s ineffective response to the hurricane, the harder it will be for Republicans to get their votes. As of late September, however, 23 percent of registered voters claimed they had never heard of Bill Nelson, while only 12 percent stated no opinion of Governor Scott (NBC/Marist poll).

It also helps Nelson that the other Democrat running for a statewide race is a stark contrast to Nelson: young, progressive, and African-American. If Bill Nelson represents the old formula for winning Florida—a moderate, anodyne non-Latino white—Gillum represents a new formula: a mobilization campaign that turns out people of color and younger voters. Gillum is campaigning on Medicaid expansion, Medicare for all, and gun control, and may effectively turn out voters who would otherwise be unenthused by a contest of two white males with a combined 141 years on this Earth.

The key to the race: since Nelson has followed a classic “wait until after Labor Day” campaign, he and his allies have a short time to (re)introduce the low-key senator to Florida voters while Scott will seek to drag Nelson’s ratings and turnout down. Thus far, Scott has only competed and won in midterm elections (2010 and 2014) and both times won by waging a negative campaign and earning less than a majority of the popular vote.

This has already been a very expensive election in a large swing state. As of Oct. 15, 2018, Nelson has reportedly spent $6.1 million with $14.6 million cash on hand. Scott’s campaign has spent $27.8 million with $3.3 million on hand, but Scott has ample personal wealth if he wants to pour more money into the race. Nelson’s spending disadvantage has been offset by $25.6 million in outside money, compared to $17 million for Scott. This is already an expensive race, therefore, and Senate Democrats may regret having to spend so much of its national budget to shore up an incumbent who ought to be winning safely with funds he raised himself.

[i] Omitting “the economy and jobs,” which is a general goal with ambiguous policy implications. That is, a creative politician can link virtually any issue to economic growth. 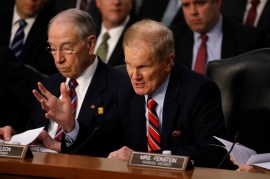