We may not know everything about what happened to Jamal Khashoggi in Istanbul on October 2, but we know this much: It was carried out by Saudi officials, acting under orders from Saudi superiors, in a Saudi diplomatic facility. Like the intervention in Yemen, like the arrests of activists and human rights defenders, like the kidnapping and forced resignation of Lebanese Prime Minister Saad Hariri, the murder of Jamal Khashoggi was a Saudi government act. Wielding the authority of his father King Salman, Crown Prince Mohammed bin Salman (MBS) is the de facto ruler of this government, an absolute monarchy. That’s where the buck stops in Riyadh.

There is no escaping the Saudi government’s responsibility for this horrific act. Sanctions against culpable individuals imposed under the Global Magnitsky Act, though important, are insufficient to address this reality, or to address the crisis in U.S.-Saudi relations it created. The depth of that crisis is evident in the bipartisan congressional majority that’s now unwilling to allow the Trump administration to maintain business as usual with the kingdom. Some U.S. officials may agree with Senator Lindsey Graham that Prince Mohammed “is crazy, I think he is dangerous,” or that “he is a wrecking ball to U.S.-Saudi relations.” In fact, though, Washington has very limited ability to influence the Saudi line of succession. To resolve this bilateral crisis, the Saudi government—in the person of MBS or someone else—must take responsibility, pay the price of these actions, and demonstrate a new path.

Taking responsibility means that the Saudi government must stop trying to deflect blame for Khashoggi’s murder with a tale about rogue actors that flies in the face of the facts, and accept that responsibility for the actions of its officers lies at its door. As President Bush apologized for the abuses at Abu Ghraib, so the Saudi leadership must apologize to Khashoggi’s family, to the Turkish government for the abuse of its diplomatic privileges, and to the United States for targeting its permanent resident. (Doing so will also curtail the ongoing Turkish campaign to embarrass the kingdom by leaking evidence gathered about the killing.)

In murdering Khashoggi, the Saudi government violated a diplomatic norm of long standing: that governments do not go after their critics on foreign soil. When the Russians poisoned a former military officer in the United Kingdom, the Trump administration expelled 60 diplomats, joined by European capitals. Given the abuse of diplomatic facilities, it would be appropriate for the United States and others to reduce the number and/or privileges of Saudi diplomats in the United States. If we fail to enforce this norm, we can expect the violations to escalate: Perhaps next we will see Turkey send goons to Pennsylvania after Turkish cleric Fetullah Gülen.

Finally, there’s the fact that Khashoggi’s murder was part of a pattern of irresponsibly aggressive Saudi behavior that has been evident since MBS began to consolidate power in June 2017, the destabilizing consequences of which have been regularly described by my colleague Bruce Riedel (here, here, and here to start). To restore a working relationship with Washington, the kingdom (and MBS) must demonstrate that they are committed to a change of course. The recent moves to facilitate Yemen talks are a good first step, but insufficient. Saudi must also end the self-defeating campaign against its GCC partner Qatar and instead forge a united front in the Arab Gulf: against Iran and ISIS, and for Israeli-Palestinian peace. And crucially, the kingdom’s rulers must signal their understanding that stable rule in Saudi Arabia’s young and dynamic society will not be rooted in coercion, but in inclusion. The women activists arrested in May and June should be released, along with others whose so-called offense is peacefully asking their government to address the needs and ambitions of its people.

The grave crisis now suffusing U.S.-Saudi relations was created in Riyadh, by the reckless choices of the Saudi government. That crisis can be resolved by the Saudi government as well, by owning its errors and demonstrating its commitment to charting a new course. There is really no time to waste. 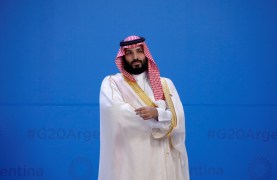