As the partial government shutdown has extended past a record 21 days, the economic costs are rising. Furloughed workers, slashed services, and jittery markets are just a few signs of the growing fallout. But one of the single biggest costs may be yet to come, even if the shutdown ends: a new border wall between the United States and Mexico.

Since his campaign, President Trump has called for the construction of a new wall spanning at least part of the 2,000 mile southern border to strengthen security and immigration enforcement. Made from steel, concrete, and other materials, the wall’s design has evolved over time, but it figures to be around 30 feet in height, similar to other walls and prototypes developed by the U.S. Department of Homeland Security. Depending on the ultimate size and reach of the wall, it could cost up to $25 million per mile and take years to build; calls from the White House for $5.7 billion would only cover about 230 miles, or about 11.5 percent of the southern border’s distance.

Depending on the ultimate size and reach of the wall, it could cost up to $25 million per mile and take years to build; calls from the White House for $5.7 billion would only cover about 230 miles, or about 11.5 percent of the southern border’s distance.

The U.S. faces a huge challenge building infrastructure projects in general, and prioritizing the wall is misguided. In an age of economic insecurity, fiscal uncertainty, and an unpredictable climate, the U.S. should focus its time and money on other needed infrastructure priorities.

Obviously, the wall raises several issues beyond the immediate construction costs, from political to economic to social impacts; immigration remains a key force for continued growth and opportunity nationally. Yet there is an even more significant question that policymakers are facing right now: Where is the money going to come from to pay for a wall? It’s a question that enters many infrastructure conversations nationally, and unfortunately, Trump’s border wall is bringing out the worst possible answers that will cost us all more in the end.

So far, the answers are short-sighted and politically-motivated. While Democrats have pushed back against the wall’s purpose and price tag, many Republicans have signaled support, creating a logjam in Congress. The White House, in turn, has explored other federal funding sources, including the declaration of a national emergency to divert disaster funding from the U.S. Army Corps of Engineers (USACE). The legality of such a move is up in the air, to say nothing of the precedent it could establish.

Traditionally, the USACE has served as the lead agency within the U.S. Department of Defense to carry out a variety of infrastructure projects nationally. Constructing and maintaining dams, waterways, and other assets all fall under its direct oversight. Disaster relief does too, as was the case this past fall following Hurricane Michael and the California wildfires. The USACE relies on $5 billion to $7 billion in funding annually to carry out its usual work activities—a fairly small total compared to all the infrastructure needs across the country. And while it also receives supplemental support from Congress for disaster response—including $45 billion from 2005 to 2018—this total is struggling to keep up with the increased frequency and intensity of our climate pressures.

If President Trump were to shift the energy he has put into the wall for a truly comprehensive infrastructure plan, the shutdown would likely be over and Americans could get back to work on the projects that really matter.

In other words, the construction of a $5.7 billion southern border wall would almost exceed the typical USACE budget for all projects nationally in a given year. And again, even though there has been an increase in supplemental support for disaster relief over time, that support has only averaged about $3.2 billion annually over the past 14 years. Of course, the prospect of diverting this funding from its intended—and needed—purpose in a time of growing climate costs is also problematic to say the least.

The need for a border wall remains at the center of an ongoing debate, but choosing how to pay for such a project matters too. As with all infrastructure, particularly in real times of disaster, federal, state, and local leaders need to consider a variety of financial tools and approaches, targeted based on demonstrated needs. If President Trump were to shift the energy he has put into the wall for a truly comprehensive infrastructure plan, the shutdown would likely be over and Americans could get back to work on the projects that really matter. Pursuing big projects with no funding to back them up—or worse, raiding scarce funding from programs and communities that need it—leaves a costly legacy for the country moving forward. 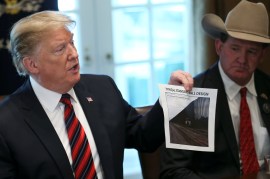