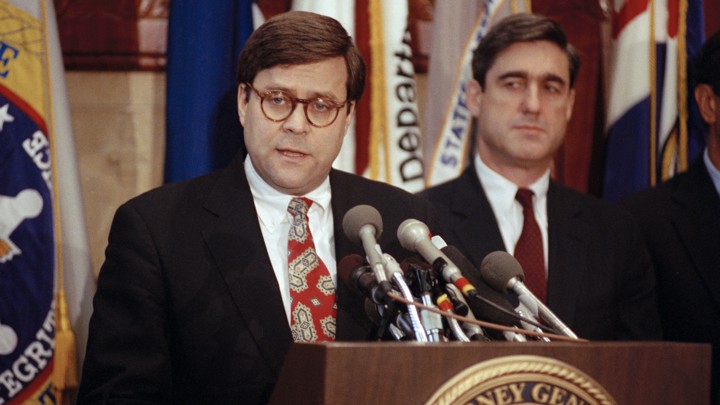 Old Friends: Special Counsel Robert Mueller and Attorney General William Barr have known each other for more than three decades; they’ve gone to each other’s Christmas parties, and their wives go to the same Bible study. But the two men have very different legal styles, and their upcoming congressional testimonies will put them opposite each other, reports Russell Berman.

Keeping an Eye on 2020: The Democratic presidential-primary field is more diverse than ever—but its two current front-runners are Bernie Sanders and Joe Biden, both white men over the age of 70. “Trump is already the oldest first-term president ever,” writes Edward-Isaac Dovere. “Maybe the next one will be older.”

+ At a recent D.C. stop on their countrywide speaking tour, Bill and Hillary Clinton didn’t sound so optimistic about how the 2020 campaign is shaping up, Dovere reports.

+ Depending on who you ask, Pete Buttigieg, the South Bend, Indiana, mayor and Democratic presidential candidate, speaks somewhere between six and eight languages. That could help explain his popularity: Society has long been fascinated by people who speak multiple languages, writes Michael Erard.

+ The candidate right now with the most comprehensive climate plan is … Beto O’Rourke?

Violence in Sacred Spaces: A shooter killed one person and wounded three others inside a synagogue in Poway, California, on Saturday, and has been linked to a recent fire at a nearby mosque. This is the second synagogue shooting in America in the past six months.

Twenty percent of American Jews don’t live in major metropolitan areas. After a synagogue shooting in Pittsburgh last October, Gabby Deutch wrote about the Jewish communities in small towns across America that have also long experienced anti-Semitism—and don’t have room in their budget for security. 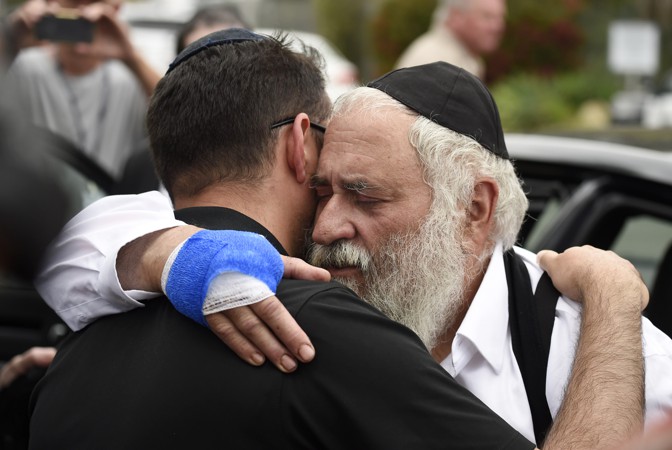 Rabbi Yisroel Goldstein (right) is hugged as he leaves a news conference at the Chabad of Poway synagogue on Sunday in Poway, California. A man opened fire Saturday inside the synagogue as worshippers celebrated the last day of Passover. (Denis Poroy / AP)

Five Things I Learned From the Mueller Report (Benjamin Wittes) “I spent the week after the release of Special Counsel Robert Mueller’s report going through it section by section and writing a kind of diary of the endeavor. My goal was less to summarize the report than to force myself to think about each factual, legal, and analytical portion of Mueller’s discussion, which covers a huge amount of ground.” → Read on.

Charlottesville Was a Turning Point (David A. Graham) “On Saturday, a man walked into a synagogue in Poway, California, and opened fire, killing one woman and injuring three others, including the rabbi. Police say he was shouting anti-Semitic slurs, and he’s tentatively linked to a hate-filled manifesto posted online. It takes away nothing from the horror of the crime to say that it feels familiar, following not just the October 2018 massacre at a synagogue in Pittsburgh but also a rise in reports of anti-Semitic incidents overall. None of this felt nearly so normal before the march in Charlottesville.” → Read on.

We Wouldn’t Have Let Obama Get Away With This (Kurt Bardella) “There is a world of difference between how Republicans viewed oversight when Barack Obama was president and their support of Trump’s obstruction. I know, because for five years I worked for Republicans on the House Oversight and Reform Committee.” → Read on.

No Option Is Off the Table (Mary Gay Scanlon) “Today, I serve as the vice chair of the House Judiciary Committee. As I undertake the heavy task of digesting, analyzing, and reacting to Special Counsel Robert Mueller’s report, that duty to country is front of mind … Despite what the president and his allies have claimed, this report is not the end of the story. It is a road map to guide Congress’s next steps.” → Read on.

Were you forwarded this newsletter? Sign up for our daily politics email here. We have many other free email newsletters on a variety of other topics. Find the full list here.