The activities of the past week have reshaped the future of net neutrality and the strategy for protecting that future.

On November 5, the Supreme Court declined to review the decision of the D.C. Circuit Court that twice upheld the 2015 Open Internet Rule. The industry groups that had long opposed non-discriminatory access to broadband networks had previously stopped such regulation at the D.C. Circuit. When they attempted the same thing with regard to the 2015 decision of the Federal Communications Commission (FCC), a three-judge panel ruled the FCC’s favor. The industry then appealed the panel’s decision to the entire D.C. Circuit and lost again. The industry then appealed that loss to the Supreme Court. The Supreme Court voted 4-3 (with Chief Justice Roberts and Justice Kavanaugh abstaining) to deny a writ of certiorari for the appeal. As a result, the lower court’s decision upholding the 2015 Open Internet Rule stands.

The FCC’s 2015 Open Internet decision declared broadband providers to be Telecommunications Services subject to the common carrier requirements of Title II of the Communications Act. Just like the telegraph and telephone companies that preceded them, internet service providers could not discriminate among those using the network. They could not, for instance, break the internet into fast lanes and slow lanes depending on how much a content provider such as Netflix paid them.

In 2017, the Trump FCC repealed the Open Internet Rule at the request of the network companies. In the process, the FCC also ruled that the agency had only minimal authority over internet networks. Except for toothless transparency requirements, the Commission would exercise no oversight over broadband internet access services. Not only did the agency created by Congress to oversee the nation’s networks walk away from that responsibility, but it also joined with the plaintiffs in asking the Supreme Court to overrule the D.C. Circuit’s 2015 decision. When the High Court denied that request, it breathed new life into the 2015 Open Internet Rule.

The second development within the past week was the Democrats taking control of the House of Representatives. House Democratic leaders from presumptive Speaker Nancy Pelosi (D-CA,) to the new Chairman of the Energy and Commerce Committee Frank Pallone (D-NJ), to the new Chairman of the Telecommunications Subcommittee Mike Doyle (D-PA) have all been vocal supporters of strong net neutrality rules. Reps. Pallone and Doyle introduced a resolution to repeal the Trump FCC abdication but the Republican majority in the House refused to move it to a vote. In the Senate, Sen. Ed Markey (D-MA) was able to use the different Senate rules to force a vote that passed 52-47).

Previously, the House gave cover for the Trump FCC on this and many other important topics. Now, with control of the gavel, Reps. Pallone and Doyle will be able to conduct oversight hearings into the activities of the Trump FCC. In addition, the committees will be able to hold hearings on the effect of eliminating the Open Internet Rule and to hear voices and facts the Trump FCC has silenced.

The probability of meaningful net neutrality legislation remains a long shot, however. Even if it was passed by the House, the Republican-controlled Senate would not likely support it. Even if they miraculously passed a bill, President Trump would no doubt veto it, having previously spoken out against net neutrality. The only foreseeable legislative path would be with the support of the network companies, and that support would come at the price of watering down the proposal to render it virtually meaningless. With the Supreme Court’s refusal to overturn the 2015 Open Internet Rule, strong rules remain a possibility even without legislation.

On February 1, 2019 the D.C. Circuit will hear oral arguments on the lawsuit challenging the Trump FCC’s elimination of the Open Internet Rule. Here is where things start to get interesting in light of the recent Supreme Court decision. If the D.C. Circuit rules against the FCC and vacates the 2017 elimination of the rules, then the 2015 Open Internet Rule is reinstated—and the Supreme Court has declined to consider the matter for now.

In their zeal to gut oversight of their activities, the internet networks and their Trump FCC allies may have shot themselves in the foot. There is a strong case that the Trump FCC acted in an arbitrary and capricious manner when it repealed the 2015 Open Internet Rule and walked away from any responsibility over the most important network of the 21st century. If the D.C. Circuit makes such a finding, net neutrality would once again be the law of the land. Although the Trump FCC would probably spitefully ignore its enforcement and even force adoption of a new rule to free the broadband companies, that action would simply bolster the Democrats in the House.

In the meantime, the House Democrats can hold a series of hearings to bring forth into the public record the information the Trump FCC and the Republican-led Congress has chosen to ignore. Any push for meaningful legislation will probably meet the opposition of the companies and their Republican allies, but the recent Supreme Court decision and a Democratic House-led push for truth will keep net neutrality alive. 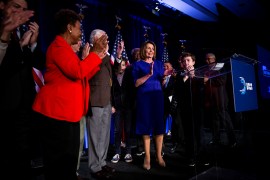