It didn’t take long for Robert Mueller’s report on contacts between the Trump campaign and Russia to become an issue in the 2020 Democratic presidential primary. More than a dozen declared and potential White House hopefuls quickly weighed in on Twitter, with several prominent candidates blasting the Justice Department for including so many redactions:

This is a disgrace. The American people deserve answers—and Special Counsel Robert Mueller should testify publicly before Congress. #ReleaseTheFullReport pic.twitter.com/ROG0Bt6JVq

Democrats directed much of their fire at Attorney General William Barr, who held a widely criticized press conference before the redacted report’s release Thursday morning, during which he repeatedly said there had been “no collusion” between the Trump campaign and Russia.

You can be the President’s defense attorney or America’s Attorney General. But you can’t be both. #MuellerReport

Using the role of AG for purposes of political messaging is a degradation of the office; William Barr has shown himself to be just another political lackey who serves to do the President’s bidding above all else. The president said he wanted a Roy Cohen and apparently he found it

AG Barr should work to protect the interests of the people, not the President. It’s clear from this morning’s press conference where his allegiances lie. The American people deserve answers.

The Attorney General shouldn’t be acting as a press secretary for the President of the United States.

Mueller, who has not commented publicly on his office’s work beyond court filings and the occasional blunt email from his spokesman, is not likely to keep quiet for much longer. Rep. Jarrold Nadler (D-N.Y.), chairman of the House Judiciary Committee, said Thursday he plans to “subpoena for the full report and the underlying materials” while also requesting that Mueller testify no later than May 23. On Twitter, several Democratic contenders echoed the call for Mueller to address lawmakers.

Attorney General Barr has made it clear he is not impartial when it comes to this investigation. Now that we have the report we should hear from Robert Mueller himself in public hearings. Our democracy demands it.

Now that the Mueller report is public, the American people deserve full transparency and accountability.

The Senate should hold public hearings on the investigation with major witnesses and Mueller should testify to his findings. And give Congress the full, unredacted report.

We need to hear from Mueller directly. The American people deserve the full truth.

Far from exonerating anyone, the Special Counsel report exposes disgraceful behavior by Donald Trump and his inner circle—both in seeking assistance from Russia & attempting to cover it up. Mueller should testify and Congress should investigate charges of obstruction of justice.

The candidates also used the occasion to urge supporters to sign petitions calling for the release of the unredacted report and for Barr’s resignation.

Congress needs to see the full, unredacted Mueller report and all of the investigation’s underlying evidence — and Special Counsel Robert Mueller must testify publicly before Congress. Add your name now if you agree »https://t.co/q2GoxtZdQ9

We can’t trust Trump’s handpicked AG to be transparent about the Mueller report. Congress needs to see it in full—and the public needs to know whether Trump obstructed justice.

Sign our petition calling on Barr to release the full report: https://t.co/Ptmf66EDk0 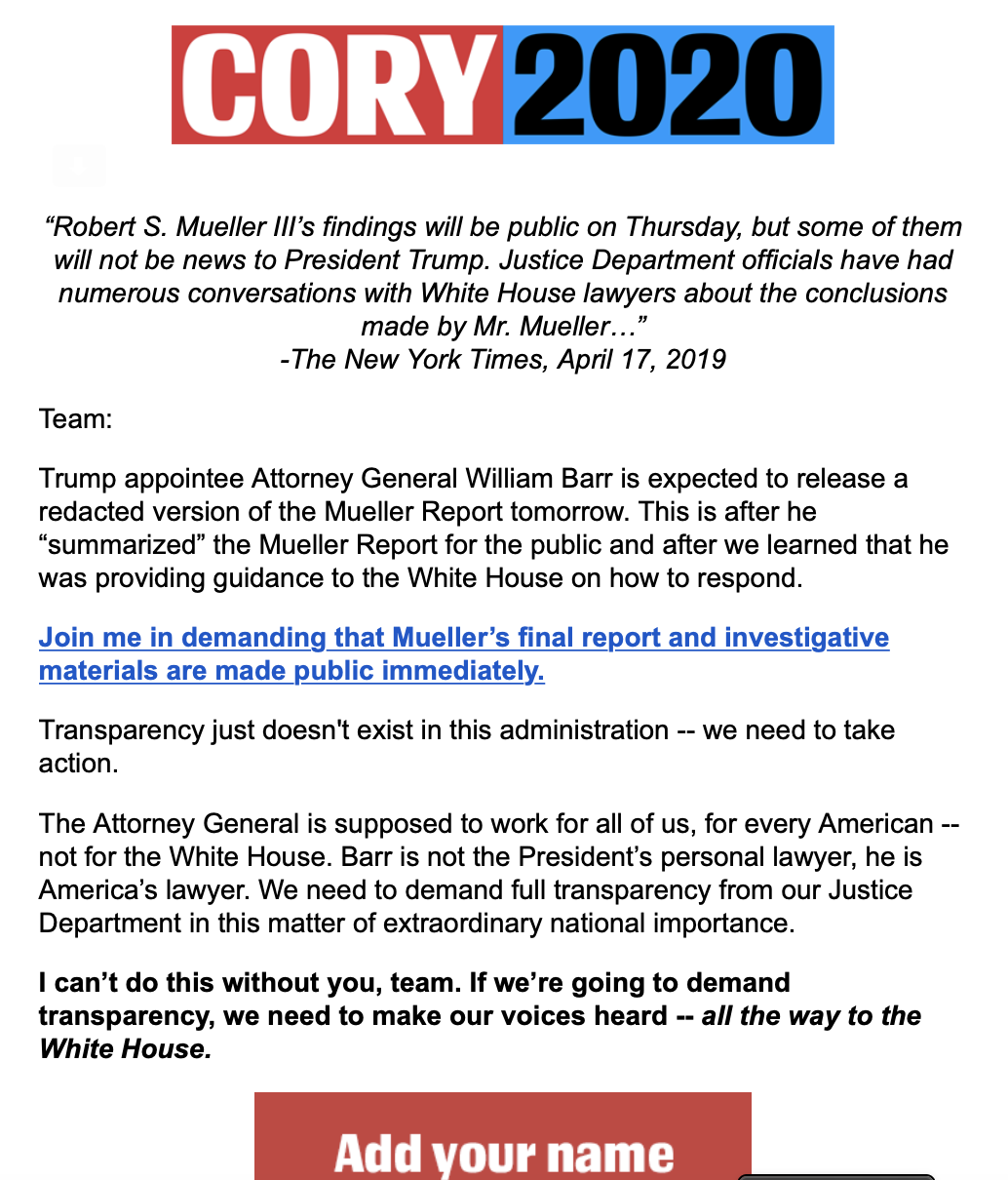 But one undeclared candidate simply held his tongue.

Reading. Be back soon. https://t.co/YtLqRWB7Ve