Hungarian Prime Minister Viktor Orbán was one of the only European leaders to endorse Donald Trump’s underdog presidential campaign in 2016. Now, it appears Trump will return the favor.

On Monday, Trump hosts Orbán at the White House. It’s a meeting that could not come at a worse time. Voting for the European Parliament elections commences May 23, just 10 days after the autocratic Orbán poses for a grip-and-grin with the titular leader of the free world in the Oval Office.

Those elections are projected to result in increasing support for a variety of nationalist factions, from Nigel Farage’s Brexit Party to Italian Deputy Prime Minister Matteo Salvini’s Northern League, all of which seek to weaken the European Union and, in doing so, provide opportunities for powers such as Russia and China to divide the West from within.

Having transformed his country into the illiberal democracy he prophesied in 2014, Orbán has emerged as the most visible leader of these forces. Under such conditions, the United States should be isolating the Hungarian prime minister, not embracing him.

Monday’s will be the first visit of a Hungarian leader to the Oval Office since 2005. White House meetings are a precious commodity that presidents typically dispense to close allies or to achieve clear-cut U.S. foreign policy objectives. Under Orbán, Hungary has repeatedly snubbed the U.S. and the liberal, democratic values it seeks to uphold in Europe. It has expelled U.S.-accredited Central European University, blocked NATO cooperation with Ukraine, unleashed state-sponsored Holocaust revisionism and anti-Semitism, and refused to extradite a pair of Russian arms dealers wanted for selling weapons to Mexican drug cartels, to name just a few of Budapest’s more egregious rebuffs.

Orbán has largely gotten away with all of this by skillfully appealing to conservative politicians, activists and intellectuals across the Western world with an anti-immigration, anti-EU mantra, and it is this message that has attracted Trump’s favor. Steve Bannon, Trump’s ex-consigliere and a longtime admirer of Orbán, once referred to the Hungarian prime minister as “Trump before Trump.”

But genuine conservatives, those who still believe in old-fashioned values such as limited government, individual rights and the rule of law, shouldn’t be fooled: Viktor Orbán is not a democrat and he is working against America’s traditional interests in Europe.

Since the collapse of communism 30 years ago, those interests have consisted of three major objectives: strengthening the European Union, guarding against Russian interference and bolstering liberal democracy. On all three fronts, Orbán has been at best unhelpful, at worst, counterproductive.

Earlier this year, the international rights watchdog Freedom House downgraded Hungary to “partly free” status, the first European Union country and first post-communist country to experience such a decline, putting it at the forefront of democratic backsliding in Europe. This demotion was registered in response to a series of moves undertaken by the Orbán government over the past nine years aimed at hollowing out Hungarian democracy, from rewriting the country’s constitution to expelling the George Soros-founded Central European University to gerrymandering the electoral system in such a way that ensures perpetual rule by Orbán’s ruling Fidesz party.

Trump’s meeting with Orbán will also have the effect of boosting the illiberal, pro-Russian European far right over the mainstream, pro-American center-right. In his latest overture to Russia, Orbán announced in March that the Moscow-based International Investment Bank, which Western intelligence officials worry will be used as a cover for Russian intelligence operations, would relocate to Hungary.

Occurring at such a delicate moment in European politics, empowering Orbán could also undermine EU cohesion. In March, Fidesz was suspended from the European People’s Party, the largest coalition of center-right parties in the EU parliament. Europe’s mainstream conservatives hoped to send Orbán a belated message that his attacks on democratic values would come with a cost.

Yet Orbán has only been emboldened to solidify his status on the far right, a strategy he hopes to impose on the rest of the continent. Last week, he appeared at a press conference alongside Heinz-Christian Strache, a former neo-Nazi and leader of Austria’s Freedom Party, which was founded by ex-SS officers after the Second World War. Though the Freedom Party currently serves in the Austrian governing coalition, with control over the Interior Ministry, its formal ties to Vladimir Putin’s United Russia party has convinced the U.S. and other European allies to downgrade intelligence cooperation with Vienna.

Orbán sees the Freedom Party as a model for the rest of Europe. If it is possible “for the center-right ruling party to work together with the right-wing patriotic party,” he told journalists, “then why can’t this happen on the European level as well?” By welcoming Orbán to the Oval Office less than two weeks before a pivotal European election, Trump essentially sends the signal that the U.S. backs such a realignment across Europe.

Last week, in anticipation of the White House confab, a bipartisan group of senators, including Republican Foreign Relations Committee Chairman James Risch and Florida Republican Marco Rubio, signed a letter to Trump criticizing the Hungarian government and urging him to “remain true to these democratic values that have undergirded our relations with Central and Eastern Europe since the end of the Cold War.” This is the right message to send, and it is vitally important that more Republicans and conservative voices endorse it. 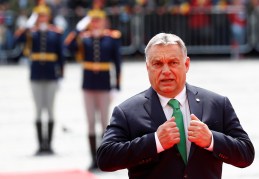