The redacted Special Counsel report released this morning confirms that the Russian government, through various proxies, carried out a multi-pronged campaign against the United States before, during, and after the 2016 election. That campaign involved three distinct elements:

The report describes in stunning detail the inner workings of the full Russian operation. To date, the report is the most comprehensive account (in addition to the previously released indictment of IRA and GRU operatives) of how the Russian operation evolved over time, how successful it was in targeting and duping Americans, and the Kremlin’s motivation.

This post focuses specifically on what the Mueller report tells us about the information operations. A second post will focus on what we have learned about Russian cyber operations and capabilities.

The IRA’s tactics evolved over time

The IRA’s first step was to build a network of accounts. Its social media activities started in 2014, seeking to create individual impersonation accounts meant to look like Americans, particularly on Facebook.

Step two was audience growth. The IRA did so by creating pages and content that were not necessarily political or even divisive, but simply meant to attract more eyeballs to IRA-controlled pages and accounts. By early 2015, the IRA had turned to audience-building around divisive social issues by creating social media groups and pages posing as U.S. groups and activists, such as “Secured Borders” and “Blacktivist” (see pages 22-25 of the Special Counsel report).

Step three was to turn this network political. It was only once the IRA established its audience base that it turned explicitly to the U.S. elections around February 2016, with the explicit goal of undermining the Clinton campaign. Instructions to the IRA read, at the time: “Main idea: use any opportunity to criticize Hillary [Clinton] and the rest (except Sanders and Trump – we support them)” (p. 25).

Step four was a move towards promoting the Trump campaign while further building the reach of the content. The focus remained primarily on criticizing Clinton until late spring 2016, when the IRA began to actively promote Donald Trump. At the same time, it aimed to further increase its audience by purchasing advertisements to promote its pages and reaching out via private messages to Facebook users prompting them to organize anti-Clinton rallies. (Recall that the IRA purchased over 3,500 ads and spent approximately $100,000, as detailed on page 25 of the report.) By the time Facebook deactivated the IRA accounts in mid-2017, the most popular group—“United Muslims of America”—had over 300,000 followers.

By the end of the 2016 election, the IRA “had the ability to reach millions of U.S. persons through their social media accounts” on Facebook, Instagram, Twitter, YouTube, and Tumblr, according to the report (see page 26). Facebook later estimated that IRA-controlled accounts reached as many as 126 million people, and an additional 1.4 million were reached through Twitter.

On Twitter, the IRA followed a similar impersonation and audience-building strategy by creating individual accounts that would post content, which bot networks would then amplify. As has been previously reported, U.S. media outlets quoted the IRA-controlled accounts as representing real American opinions. So did members of the Trump campaign, including Trump family members (see pages 27-35 of the report).

The IRA’s intent from the outset was to use its digital operations to affect real life: As early as 2015, the IRA attempted to organize rallies on divisive social issues. The “confederate rally” of November 2015 was just one of dozens of rallies that aimed to amplify socially divisive issues in the United States.

It was only after June 2016 that the rallies focused almost exclusively on the U.S. election and pro-Trump rallies. This tells us that the original goal of the social media operations, from 2014 to early 2016, was a straightforward, KGB-style infiltration operation aimed at polarizing and destabilizing U.S. society from within. Recall that during the Cold War, the KGB infiltrated environmental, civil rights, peace, and religious organizations.

What we don’t know, due to redactions

The structure of the IRA—perhaps the most interesting section—is almost fully redacted due to “harm to ongoing matter,” suggesting that the Department of Justice could still be pursuing further indictments against Russian individuals and entities involved in the IRA operation. We know from the February 2018 Department of Justice indictment of IRA operatives and entities, as well as independent reports, that the so-called “troll farm” in St. Petersburg focused on the United States was part of a larger interference project funded by Russian oligarch Yevgeny Prigozhin called “Project Lakhta.” We also know that the IRA hired specialists for each social media platform, who were given specific instructions on which messages to push, how, and the performance quotas they had to meet. Yet, we still don’t know the full scope of the command structure, how far into the Kremlin the decisionmaking process reached, and how the project continues to be funded today. Funding and oversight of IRA and Prigozhin is also almost fully redacted.

The section on the IRA Twitter botnets is, interestingly, also redacted. This again suggests that further investigation may be ongoing into how the IRA established and used the automated accounts to amplify its content.

The bottom line is that the Mueller report clearly shows that the Russian information operations were highly adaptive to the political context in the United States, followed a seemingly well-thought out strategic plan akin to a marketing or public relations campaign, involved direction from Russian intelligence, and were incredibly effective in infiltrating American media while influencing public debate around the 2016 election. 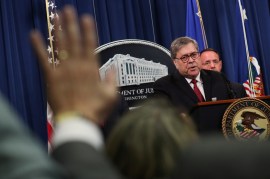