Donald Trump will deliver his State of the Union address at perhaps the lowest point in his presidency so far. The midterm elections were the first solid evidence that the country was not entirely in step with his governing philosophy or his leadership style. He was forced to back down from a shutdown of the government that many had warned against—suffering a loss at the hands of the Democratic-controlled House of Representatives. Even his own party is giving him problems: the Republican-controlled Senate rebuked his withdrawal of troops from Syria in a vote that could be a harbinger of greater and more significant defections. And that was all in Washington D.C.

Outside the beltway things are also looking grim. Trump has yet to poll over 50 percent when voters are asked whether they approve of his performance as president, and recent polls have put his presidential approval in the high thirty-percent range. Moreover 56 percent of voters say they would definitely vote against him in the 2020 elections, compared to 28 percent who would definitely vote for him.

This latter poll is the worst number for any of the recent presidents about whom this question was asked. And in spite of a healthy economy and low unemployment, even support among Trump’s base appears to be shrinking—his approval ratings are slipping among Republicans, white evangelical Christians, suburban men, and those without a college degree.

And hanging over his presidency is a cloud that only appears to get darker as the indictments and convictions of his associates roll up: the Mueller investigation.

President Richard Nixon delivered a State of the Union address on January 30, 1974. He was in serious trouble. In July of 1973 he had been forced to turn over tapes of his conversations in the Oval Office to prosecutors. In October, Vice President Spiro Agnew resigned on corruption charges. In November Nixon ordered Attorney General Elliot Richardson and Deputy AG Bill Ruckelshaus to fire the special prosecutor. They resigned in protest. Shortly after Nixon gave a speech in Florida where he uttered the famous line, “I am not a crook.” Two years of investigations into the Watergate scandal had taken its toll. By the time he delivered his 1974 State of the Union, his disapproval ratings exceed sixty percent and his approval ratings were in the 20-percent range.

In his 1974 State of the Union Nixon bragged about his accomplishments, especially the fact that “After more than 10 years of involvement, all of our troops have returned from Southeast Asia, and they have returned with honor.” Nixon also noted that the 17-year rise in crime had been stopped, that 2.5 million new jobs had been created, and that people were earning more. Then Nixon pivoted to a list of ten areas where he argued “landmark accomplishments are possible,” including energy independence, peace in the Middle East and other equally aspirational goals.

It was only toward the end of the speech that Nixon turned to the question on everyone’s minds. First he proclaimed his cooperation with the investigation (a dubious boast considering that he had fired the Special Prosecutor), and then added “I believe the time has come to bring that investigation and the other investigations of this matter to an end. One year of Watergate is enough.” In less than eight months, Nixon would get his wish. The Watergate scandal would end, but so, too, would his presidency.

President Bill Clinton gave his second-to-last State of the Union address on January 19, 1999. Like Nixon he was in the midst of major legal trouble. He had actually been impeached by the House in December of 1998, and his trial in the Senate had begun. But Clinton in 1999 was in a much stronger position than Nixon in 1974. To the astonishment of many, the 1998 midterm elections had defied the conventional wisdom and instead of losing seats, as most presidents’ parties do in the second midterm of a presidential term, the Democrats picked up seats that year. At the beginning of 1999 his approval rating actually went as high as 73 percent in the Gallup poll and stayed in the 60 percent range throughout the year.

And yet his high approval ratings didn’t mean that voters approved of his sexual behavior with a woman young enough to be his daughter. In fact only 44 percent viewed him favorably “as a person” and 77 percent said he lacked high moral and ethical standards.

Nonetheless Clinton’s roll call of presidential accomplishments included some eye-poppers—“For the first time in three decades, the budget is balanced…we are on course for budget surpluses for the next 25 years.” While the prediction fell apart after 9/11, the accomplishment was impressive and historic. Like Nixon, Clinton had a solid record to brag about. Clinton did not mention his legal troubles in his speech. Perhaps he felt no need. Unlike Nixon, the grounds for Clinton’s impeachment, lying about sexual misconduct, didn’t seem to rise to the level of “high crimes and misdemeanors.”

So what will President Trump do with the Mueller investigation hanging over his head? He will obviously try to paint a picture of a successful presidency. He has tried hard to bring troops home from the Middle East and Afghanistan and to brag about the defeat of ISIS. Unfortunately, neither the U.S. intelligence community nor the Republicans in the Senate agree with him or his strategy. No doubt the economy and employment numbers will be front and center in Trump’s speech, and this is his strong suit. Voters divide predictably along party lines as to how much Trump is responsible for the strong economy. But to the extent that the economy continues on its current path, it definitely helps Trump. So, expect to hear a great deal about the economy.

It has been reported that Trump will try to make this State of the Union about unity, not division. But it has also been reported that he will discuss immigration—perhaps the most polarizing issue in today’s politics. So doing both in one speech will be difficult to say the least.

And hanging over the speech will be the shadow of his legal troubles. Will he call for an end to them, as Nixon did, or ignore them as Clinton did?

And finally, what will he promise for the future? Both Nixon and Clinton had big lists and big goals to buttress their State of the Union message: “keep me around.” Trump will probably do the same but unlike Nixon and Clinton who were both, in their own ways, good at the job, Trump doesn’t seem to be good at the job; the disastrous government shutdown is only the latest example of his inability or unwillingness to negotiate. Trump faces an enormous credibility gap—one that a laundry list of accomplishments and aspirations is unlikely to erase. 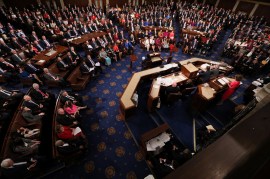