The race to be the Democratic nominee for president is officially on. You may think that Senator Elizabeth Warren (D-Mass.) was first out of the gate, but in actuality, former Congressman John Delaney (D-Md.) and former state Senator Richard Ojeda (D-W.V.) were already running. This could be a continuing trend between now and the nominating convention—lots of candidates throwing their hats in the ring, some you’ve heard of and others not. Still to come are, potentially: half a dozen senators, a former vice president, governors past and present and many others—including some high-profile women. The absence of a clear frontrunner and the sheer number of potential candidates has led to a lot of hand-wringing among Democrats about what might happen in 2020. But that concern may not all be warranted. The nomination race for the presidency is unlike any other political contest in America, so here’s what to know as 2020 ramps up.

The rules are not very different than they were in 2016. The biggest change is that superdelegates will not be allowed to vote on the first ballot. They will be allowed to vote on other convention business, on a second ballot (should that come to pass), or on the first ballot if their votes won’t change the outcome of the primaries. These changes mean that superdelegates will not play a big role in choosing the 2020 nominee—but they wouldn’t in any event. For all the attention they’ve garnered since 1984, when they were first used, superdelegates only played a significant role in those years when there was a clear establishment frontrunner. In 1984, former Vice President Walter Mondale had overwhelming support among superdelegates, as did Hillary Clinton in her two runs for the nomination. In those contests, the superdelegates helped the front-runner overcome setbacks. But 2020 doesn’t have a formidable frontrunner. Former Vice President Joe Biden is probably the closest there is, but from the Senate alone, he may have to compete against as many as five other candidates for superdelegates’ votes.

The complex rules for awarding delegates to presidential candidates have not changed in many years and will remain the same in 2020. First, there is a threshold of 15 percent of the primary vote for winning a delegate. In a twenty-person field, many candidates won’t win a single delegate. Second, while delegates are awarded proportionally—the calculations are to whole numbers—delegates (unless they are from small territories) don’t carry fractions of votes. Congressional districts usually have three-to-five delegates. Some very Democratic, usually African-American districts can have as many as nine delegates, but these are few and far between. So, in a field of 20 candidates, many will win only a handful of delegates. By the time Super Tuesday is over, candidates without delegates are likely to be walking ghosts.

Because the sequencing of primaries is what makes the presidential nomination process unique, some people think that California’s move to March 3, 2020—right after the important early states—will upend the game. But it will more likely just make Iowa and New Hampshire even more important. Big states are always moving their primaries early in an effort to get the attention the two small, early states get. And, ironically, it only serves to increase the importance of those small states. The reason? No one has the money or time to campaign in a state as big as California at the outset of the primary race, and the verdict from the early states will confer on the top two or three winners that most precious commodity in presidential nominating politics: momentum.

Furthermore, California’s early primary will not necessarily help a candidate from California such as Senator Kamala Harris. She will be expected to win the state. Losing it—even coming in second—would be a disaster that would hurt her momentum going forward. And while California does have the most delegates, it is not a winner-take-all state the way it is in the Republican nomination race. Even a solid performance in her home state may not help her delegate totals.

Iowa and New Hampshire will be as influential as ever

In a sequential contest, being first matters, which is why Iowa and New Hampshire fight like hell to maintain their places on the calendar. These two states will, along with Nevada and South Carolina, narrow the field. John Delaney and Richard Ojeda cannot withstand a 10th-place finish in either state. And Elizabeth Warren and Bernie Sanders (I-Vt.) cannot withstand a 2nd-place finish in New Hampshire. Coming from Massachusetts or Vermont—neighbors to New Hampshire, which share television and radio channels—means that expectations are high for candidates from those states. Winning in New Hampshire is not about the vote total but about expectations. In 1992, the late Massachusetts Senator Paul Tsongas finished first in New Hampshire. And no one cared. Governor Bill Clinton, plagued by scandals, finished second and got a boost of momentum that carried him through the rest of the season. One month and one day after winning the New Hampshire primary, the Massachusetts senator was out of the presidential race.

After Super Tuesday only the delegate count matters

Once the candidates have moved through the crucible of the early states, attention moves to the delegate count and actual human beings begin to be selected as delegates. In counting delegates it is not just the mathematical calculations that matter, it is also the delegates themselves and how loyal they are to the presidential candidates. By mid-March there will be candidates who won a handful of delegates in the first few weeks of the season. Many will simply drop out—freeing their delegates. Others will endorse another candidate and hope that the delegates they have will follow their lead. But as the season moves on, delegates (and their loyalty to the candidate) will matter more and more. If there are more than two candidates in the race by late spring there will be pressure to endorse whoever is in front.

If they don’t there is a possibility of a brokered convention but there have only been three serious convention fights in the modern nominating system and they have all been driven by strong ideological battles in the party. In 1972 the McGovern radicals (as in Senator George McGovern (D-S.D.)) fought the old-line party establishment. In 1976, former Governor Ronald Reagan led a conservative revolt against President Gerald Ford, the last of the “Rockefeller” Republicans. And in 1980 Senator Ted Kennedy (D-Mass.) led a liberal revolt against the more conservative southerner President Jimmy Carter. It is difficult to wage a convention battle without an ideological underpinning.

Because the modern nominating system unfolds in a sequence of events it has many ways of winnowing out a crowded field. If history is any guide, by mid-March 2020 there will be many fewer players and by summer 2020 there is likely to be only one.

Elaine C. Kamarck is a Senior Fellow at the Brookings Institution and author of Primary Politics: Everything You Need to Know about How America Nominates Its Presidential Candidates. She is a superdelegate to the Democratic convention. 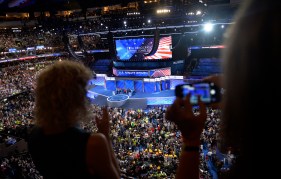